Music Theatre Unleashed not only showcases our country’s professional music theatre performers but also provides a stage for Kiwi composers to showcase their work.

We have taken submissions from all across New Zealand and have curated our June #MTunleashed event with some of our country’s top and most promising music theatre writers including Luke Di Somma, William Eric Green, Josh Clark, Cally Castell, Brayden Jeffrey + Adam Spedding, Jessie Leov Music + Marley Richards Music and Erin Fagan.

We are thrilled to announce our Auckland Live Cabaret Season #MTunleashed cast. Jane Leonard, Jonathan Martin, Cherie Moore, Sammie Campbell, Renaye Tamati and Rutene Spooner will deliver an evening of 100% Kiwi music theatre songs, written by some of our best composers & lyricists, in the glamorous surrounds of The Civic – Wintergarden!
BOOK NOW: bit.ly/MTUcabaret

June 16th #MTunleashed comes to you as part of the Auckland Live Cabaret Season, set in the elegant surrounds of Auckland’s The Civic Wintergarden, featuring 100% Kiwi music theatre songs written by some of our best composers & lyricists.

Grab your tix now: bit.ly/MTUcabaret from $25*

With a need in our industry for continuing education and training for our professional music theatre artists, NZMTC presents our first Music Theatre Masterclass event. This workshop is a two day intensive with industry professional David Wynen, direct from New York.

LEGENDARY DIVAS at The PumpHouse Theatre, Takapuna, AUCKLAND – 1 NIGHT ONLY!

#LegendaryDivas is a show starring award-winning actress and singer Ali Harper and honours the legendary women that inspired us with their music… talented, hardworking, original and courageous women who gave so much of themselves, no matter the price.

Expect nostalgia, comedy, audience participation, a rip-roaring 80’s medley with a splash of Madonna as well as many stories enlightening the audience; French Chanteuse Edith Piaf’s connection with the Resistance, a Julie Andrew’s ‘My Fair Lady’ spoof to Dolly Parton and her love for the ‘nip and tuck’.

Glamorous and captivating, Legendary Divas is a feast for anyone who wants to reminisce and celebrate those extraordinary women who will always remain in our hearts through their music.

Ali will be joined by David Sidwell on the piano so grab your friends and see what everyone is raving about!

‘Loud applause for this generously gifted actress, with an all-enveloping voice that can take us with her no matter what she sings, is a further extension of the celebration of song that she offers.’ – Theatreview Christchurch

Join the cast, comprising a selection of New Zealand’s leading, professional music theatre artists as they deliver 90-minutes (2 Sets) of contemporary music theatre songs as solo’s, duo’s and ensemble numbers, all accompanied by the incomparable Josh Clark on the piano + band.

Gather your friends, family, and workmates together and join us for what will be a stellar night of entertainment.

‘Music Theatre Unleashed’ has been established as a way to provide consistent, paid opportunities for our professional Music Theatre artists here in New Zealand. 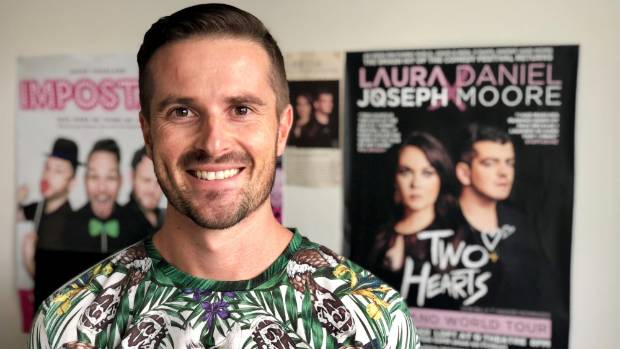 Brendan Talbot wants to see more shows that tell gritty stories, and there’s enough of them out there waiting to be performed.

It’s why he co-founded the New Zealand Music Theatre Company to help fill a gap in the country’s professional musical theatre market.

One year since it launched, he’s produced four solo artist shows at Auckland’s Basement and Q theatres, including the cabaret PUSS on April 27 and 28.

The aim is to provide regular professional gigs for trained artists, Talbot says.

“A lot of people are creating their own shows to stay active and get their reputation out there,” Talbot says.

A regular on stage at his local community theatre in Papatoetoe for years, Talbot knows what it’s like to be a performer itching to put something on.

He already had a business degree under his belt when he starred in a production of Cats at The Civic and decided he’d give musical theatre school in Melbourne a shot.

More than five years, and plenty of cabaret shows, later, he returned to Auckland, put his business hat back on, and created his company.

“I have a big understanding of what it’s like and how hard it can be . . . For me this is a way of giving back and creating pathways that weren’t available to me.”

It’s a big risk, he says, but he’s realistic about it and is starting with diverse small-scale shows that run for only a few nights.

“The focus is on the work on stage and the performance rather than the production value.

“I’m slowly building the company based on the need from performers.”

Talbot’s busy lining up shows for the next few years, with the ultimate goal to be producing three-week musicals around New Zealand.

He wants to prove to audiences that musical theatre isn’t about the blockbusters or breaking into song and dance every few minutes.

“I think there’s a stigma, if anything, that a locally created show isn’t as good as a touring company but I truly believe we have the talent with these smaller shows.”

We are very excited to have aligned with Anne Batley Burton a.k.a The Champagne Lady (The Real Housewives of Auckland) and her Foundation, The NZ Cat Foundation, and we will be donating $2 from every $30 GLAMOUR PUSS VIP ticket sold to help #savethepussies!
—————————————————————-
BUY TICKETS: www.comedyfestival.co.nz (iTICKET)

Directly from starring as ROXY in CHICAGO (The Court Theatre, Christchurch) New Zealand Music Theatre artist Nomi Cohen brings her musical comedy cabaret show PUSS to The Basement Theatre as part of the NZ International Comedy Festival for 2 nights ONLY!

“This marvellous piece was funny, captivating and vocally stunning” – @keepingupwithnz

Join Puss for an evening of musical comedy as she recounts her rise to fame and her fall from grace. A Remuera feline once at the top of her game, Puss finds herself clawing her way back to the top after her tragic downward spiral of drugs and heartbreak. Will she ever be in the spotlight again?

Running Time: 60 minutes
—————————————————————-
NOMI COHEN – Show Creator/ Performer
Since graduating the National Academy of Singing and Dramatic Art (NASDA at Ara) in 2012 and The Actors’ Program in 2013, Nomi has worked on numerous projects both on and off the stage and screen. She has appeared in several shows at Basement Theatre in Auckland, including Ghastly Dash Grim directed by Ben Henson, the sold-out season of Twisted and in 2016 co-wrote and starred in Hungover, a musical comedy with director Hamish McGregor. Nomi is also a regular cabaret performer. Some of her other highlights include working with director Michael Hurst for Auckland Theatre Company’s season of Lysistrata, traveling to Palmerston North for a season of Wings by Jess Sayer and directed by Darlene Mohekey, and being involved in various sketches with Jono and Ben on Three. Nomi Cohen has just finished playing Roxie Hart in The Court Theatre’s summer season of ‘Chicago’.
——————————————————————————————-
Get social with us!

The release of our first 2018 project is coming very soon!